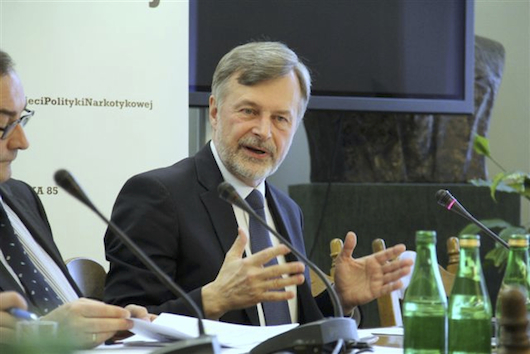 The Polish drug law is the second most restrictive in Europe, after the drug law in Belarus. The Act on Counteracting Drug Addiction requires immediate change. Based onthe current legal provisions every 3 minutes a person is detained being suspected of illegaldrug possession. Annually this number exceeds 30,000 people.
Changes in the law recommended by the Polish Drug Policy Network
The Polish Drug Policy Network initiated and developed, with the support of the experts, a draft amendment which proposed two fundamental changes aimed at both humanizing the Drug Act and applying the European standards to it.

Marek Balicki, member of  the Supervisory Board of Polish Drug Policy Network. Foto.: Maja Ruszpel
These changes stipulate:
Act by the Polish Drug Policy Network in the Polish Parliament
The draft amendment to the Act on Counteracting Drug Addiction has been submitted to the Parliament by the initiative of 15 members of two parties: Civic Platform and the Palikot Movement (currently Your Movement). It has been a subject of many discussions between MPs during meetings of parliamentary committees, also during the Legislative Committee meeting.  Michael Kabaciński, MP from Your Movement supporting changes proposed by PDPN, underlined several times that although the amendment of the Act of December 2011 had introduced a slight liberalization of punishment for possession of drugs, the focus of law enforcement agencies remained on the prosecution of recreational drug users.The reason is the lack ofaccurate definition of „minor” quantity of illegal substance in thePolish law.
“In practice, there are cases that 0.5 g, a very small amount, is often regarded as significant and the userwill be punished,” MP  said. “But there are also cases when a person has more than 2 g,which is definitely more than 0.5 g, and his/her case becomes subject of the Article # 62a of the Drug Act allowing discontinuance of criminal proceedings.It is a kind of inconsistency. In our opinion, there is an element of unconstitutionality, as there is no equality before the law. One person is considered to be the holder of illegal substance and criminal proceedings are initiated, while the proceedings in the case of the other are dismissed”,  Kabaciński said.
Problematic „minor” amounts in the case law
An attempt to determine the limits was undertaken by the Supreme Court in several  decisions which do not specify, however, clear and precise criteria, and are even contradictory. For example:
– The Court of Appeals in its judgment on February 20, 2008 (II AKa 10/08) stated that „a significant amount” of narcotic drugs or psychotropic substances within the meaning of the Act on Counteracting Drug Addiction of 29.7.2005 is the amount that allows to prepareat least several hundreds of single portions, so to intoxicate at least a few hundred people.
– The Supreme Court on November 4, 2008 (IV KK 127/08) issued a statement saying that the crime fulfills the criteria to be subject of the Article #62 of the Drug Act if possession of narcotic or psychotropic substance isin an amount for even one-time use of the substance,in its characteristic dose, able to produce other than medical effect on the user.
– The Supreme Court in its ruling on January 21, 2009 (II KK 197/08) concluded that possession of a psychotropic substance related to drug use or desire to immediate use by the person possessing it does not qualify for  possessing this substance within the meaning of Article # 62 section 1 of the Act on Counteracting Drug Addiction of July 29, 2005.(II KK 197/08).
Unfortunately, in February 2014, the majority of the Members of the Legislative Committee voted for discontinuation of work on the PDPN draft amendment in the Polish Parliament. This decision was taken despite the rationality of the proposed amendments (the current legal provisions criminalize thousands of young people), which are advocated for by not only prosecutors, but also by the police. Therefore, the Polish Drug Policy Network will consider the comments of the Legislative Committee and will again submit the draft amendment with the help of the MPs.
Let us recall that the last amendment of the Drug Act, which entered into force in 2011 and gave the opportunity for judges and prosecutors to discontinue the criminal proceedings in case of possession of small amounts of illicit substance, was also the result of the PDPN efforts. The Network experts then repeatedly stressed that the proposed amendment was only a timid step towards rationalization and humanization of the Polish Drug Law.Therefore, further reforms are needed, among them the introduction of the drug amounts reference tables which can be regarded as their key component.