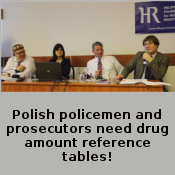 Polish policemen and prosecutors need drug amount reference tables!
The Poland’s drug law is the second most restrictive in Europe, after the drug law in Belarus. The Act on Counteracting Drug Addiction requires immediate change. Based on the current legal provisions every 3 minutes a person is detained being suspected of illegal drug possession. Annually this number exceeds 30,000 people.

In the past few months, the Polish Drug Policy Network (PDPN) organized a number of training courses for the Polish police and prosecutors to encourage for the use of the new drug law, as well as toidentify theobstacles to their use.

Let us recall that according to the new drug law in Poland prosecutor have the possibility (not the obligation) to refrain from prosecuting in cases of possession of small quantities of drugs intended for personal use. Although this provision has been valid for the last 1,5 years, it has not been stillwidely used. In the Eastern Poland, the number of cases dismissed by prosecutors based on the Article # 62a of the Drug Act is the smallest. In particular, this problem exists in two cities: Rzeszow and Bialystok, that is why training courseswere held there byPDPN. Among speakers there were Maciej Nowicki, prosecutor from Warsaw, Barbara Wilamowska, the Ministry of Justice representative, Agnieszka Sieniawska, PDPN Chairperson, and Piotr Kładoczny and Piotr Kubaszewski, both lawyers at the Helsinki Foundation for Human Rights.

The total of 60 prosecutors from five district prosecutors’ offices and the regional prosecutors’ office took part in these meetings. Prosecutors were very open to dialogue with us. We talked with them about the purposes of the amendment and the fact that the lawwas primarily to prosecute criminals, not „Sunday” drug users or addicts.
During the discussion, a problematic issue has emerged, which precluded the redemption proceedings relating to drug users. Prosecutors agreed that the lack of definition of „minor” amount of illegal substances was a big mistake, which made their work more difficult!

Sieniawska, Nowicki, Wilamowska, Kładoczny, Kubaszewski. Foto Maja Ruszpel
“If the prosecutors know, for example, that the amount of up to 5 grams of marihuana is the „minor” amount, it is easier for them to dismiss criminal cases,” Sieniawska reports.
That is why the Polish Drug Policy Network demonstrated to the prosecutors the drug amount reference tables, which had been developed in the other European countries.
“Such tables are successfully applied in the European countries and exactly explain the concept of „minor” or „significant” amounts of drugs. Therefore, it is worthwhilethinking about introducing a similar tool in Poland.This would facilitate the work of the prosecutors, the police and the courts,” Sieniawska summarized.
In January in Warsaw, the training course for the Polish police officers was held with participation of the foreign visitors – Jim Pugel and Alexandr Zelichenko (more about the visit : http://www.youtube.com/watch?v=2N3AJ9Iw8VA)
Interestingly, the conclusions of the meeting were very similar. Polish policemen also clearly defined barriers to the application of the new law – the lack of clear and precise criteria for prosecution in the form of reference tables.